Lately, I've been lucky enough to pick up quite a few ghost writing projects workng with various celebrities (no, I can't tell you who!). The work is interesting and a completely new venue for me, but it has required quite a bit of travel. Kevin has been doing a fabulous job as "Mr. Mom" (with help from Grammie and from our friends and neighbors) over the past several months. This weekend, he'll get to take Lil Bit to gymnastics and Sisi shopping for a dress for Homecoming at her high school while I'm in Las Vegas (yes, I know... poor me!)

Since he's "Dad on duty" he won't get much peace until I get back late next week. So you can hardly blame the guy for taking his lunch break yesterday from work to run a few personal errands and have a long, leisurely, solo lunch.

Kevin's lunch at a Chinese restaurant not far from our house was solo--and eventful.

The restaurant does a healthy carry-out business, but is often nearly empty inside. That was the case during his lunch. Only one other table was occupied--by two other white guys who seemed determined to use every racial slur against Asian women possible before leaving.

"Hey China doll!" One of these men shouted at the waitress. "Come over here!"

"YOu got to watch out for the slanty eyed ones!" This guy was on a roll.

On and on, it went from this dude, while Kevin listened in amazement. He couldn't help but listen-- the guy was shouting his ignorance through the restaurant. Apparently, he thought he was funny.

He kept looking at Kevin, trying to guage if Kevin was on board with what he was saying. Kev gave him the stink eye-- which probably kept him from saying more. 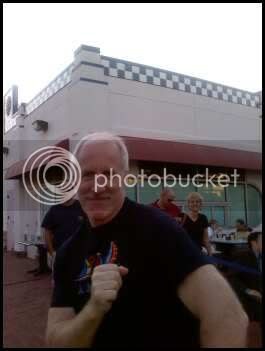 As he was paying his bill, this dude, who unfortunately embodies the beer-bellied redneck stereotype physically as well as in his conduct, followed the young waitress behind the counter and stood behind her, breathing down her neck while she opened the cash register, effectively blocking her ability to get away from him. My chivalarous husband was ready: the guy was big and sloppy, but Kevin is strong. My money is on Kevin in most circumstances because I've seen him action on a boxing bag--but it didn't come to that. The guy made a few more racist, sexist comments and left, laughing with his buddy because he's just so damned funny.

"That guy was a jerk," Kevin told the waitress when she came over to check on him.

She nodded, sadly. "The restaurant's owner threw him out once-- and told him not to come back. But he comes anyway. Not often, but every now and then. I guess I could call the police but..." she shrugged. "Really all he does is talk."

Kevin pointed out that he followed her behind the counter-- as sure an attempt at physical intimidation as any-- but she seemed to think the guy was loud and offensive, but basically harmless.

"I was just disgusted," he told me on the phone later. "I like to think of our community as multicultural and tolerant, but clearly we've got our share of bigots, too. I mean, it's 2010! What rock has this asshole been under?"

I don't know, but the assholes are indeed among us. Every day and everywhere, they move through the world, spewing ugly stereotypes and perpetuating their particular kinds of ignorance and "humor." Some are beer bellied guys in restaurants-- but others are clean cut and innocuous looking, whispering in office cubicles and checkout lines. Some are preaching in churches and teaching in schools. Still others have their own TV shows, using a much more stuble language of divisiveness--but it's there all the same.

Like Kevin, we all need to give these folks the "stink eye". We need to let them know we don't agree-- and when necessary, we need to be vocal and even aggressive about it. Like the saying goes, "All that is needed for evil to triumph is for good men to do nothing." I'm proud of Kevin for treating words with a proper expression of disagreement and disapproval-- and for being willing to intervene upon the suggestion of something more sinister. I'm also proud of him for letting the young woman know that one individual's bad behavoir isn't the standard by which all should be judged.

It sometimes seems that racism is too large and amorphous for us to fight. But it really isn't. It's through our smallest acts, we fight these attitudes: by turning away, by repudiating, by refusing to purchase or participate, by turning off our TVs. Small actions, yes... but ones with big consequences when we do them consciously and with the courage of our convictions.
Posted by Karyn L. Folan at 6:57 AM